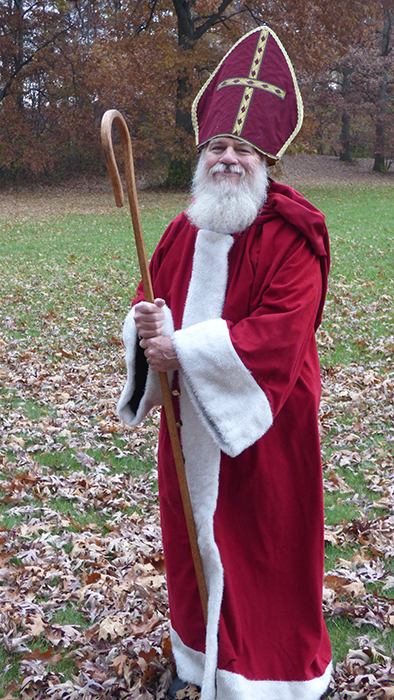 Steven Merrill, Ph.D. is Malone's newest nursing professor, but hospital scrubs are not his garment of choice. Rather, he's often seen on campus wearing a Hawaiian shirt and driving a '61 Willys pickup truck. And in the winter? He's all in red and white, portraying Saint Nicholas or the more modern version of Santa Claus.

"I have long been a fan of St. Nicholas, Christmas, and Santa," said Merrill. "This time of year, I have the opportunity to put all of this together."

He portrays a traditional Santa Claus for numerous local events: schools, the Malone University Student Christmas Dinner (his wife comes as Mrs. Claus), and his children or grandchildren's activities.

Merrill also had been presenting about St. Nicholas in his church for several years, when he met a woman whose late husband had portrayed St. Nicholas, and she wasn't sure what to do with his vestments.

"When she knew how I was using them, she gave them to me," Merrill said. "They were made by a nun and are supposed to be a close representation of what a fourth century bishop might have worn. They serve well, and give me the opportunity to talk about a real man who cared deeply about the poor and children in his community and served others as an expression of his faith. He stands as an inspiration to us today in a time where there is so much need."

In addition to churches, Merrill also portrays St.Nicholas at historical society events and would welcome additional opportunities. For more information, you may reach Merrill at 330-471-8312.