Griffin Working for Peace in Cleveland

As executive director of the Community Relations Board and cabinet member for Mayor Frank Jackson, Blaine Griffin ’93, makes it a point to return every single phone call – from the elderly resident concerned about crime in her neighborhood to the President of the United States. 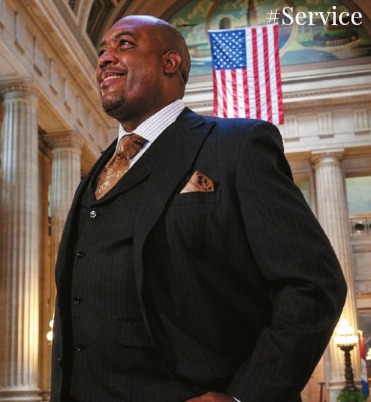 Griffin’s first job in Cleveland was right after graduating from Malone – he worked with at-risk youth to prevent them from joining gangs. At that time, he witnessed directly the enormous inequities in public policy, and developed a huge passion to make an impact on his city, his nation.

Jackson credits Griffin – and Cleveland City police chief Calvin D. Williams – for Cleveland not erupting into violent riots as did Ferguson, Missouri or Baltimore, Maryland after 12-year-old Tamir Rice was shot in November of 2014.

The city has continued to see unrest such as when the verdict was read acquitting the Cleveland Police Officer Michael Brelo of the 2012 deaths of Timothy Russell and Malissa Williams after a 22-mile police chase and shoot-out. Again, when no criminal charges were brought against the officers who shot Rice. Yet, to this point, demonstrations have remained nonviolent.

“Blaine’s leadership has been essential,” Jackson said. “The fact that the city didn’t blow up is because of how he handled things. There were the same conditions here as in Ferguson or Baltimore, but we have different results because of how things were handled.”

Griffin has worked tirelessly to develop partnerships, policies, and programs to assist restored citizens (formerly incarcerated people) to successfully reenter the community. He has called on these folks – and everyday citizens – to promote peace by engaging them in grassroots efforts and serving on active and visible peacemaking groups.

“Some cities are still suffering from damages caused in the riots of the 1960s – and I do not want to see that happen again,” Griffin said. “We welcome protests and freedom of speech, but we do not tolerate damage to person or property.”