Professor of International Politics Scott Waalkes wanted to learn more about how transitions of presidential administration affect foreign policy. As such, he has spent this semester in the nation's capitol as a Sabbatical Fellow for Public Policy in the American Studies Program in Washington, D.C. 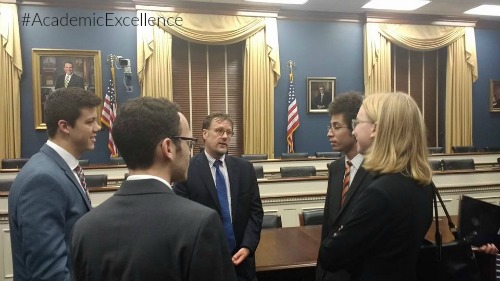 “Having four months of living and working in D.C. has been vital for my understanding of our political system, and I look forward to sharing what I've learned with Malone students for years to come,” said Waalkes. “I am overwhelmingly grateful for this amazing opportunity to watch the transition of power at a delicate time in our nation's political history.”

Waalkes is particularly fascinated by the disconnect between Washington insiders and 'ordinary people' in the Midwest.

“The citizens of DC voted 93% for Clinton and 4% for Trump,” Waalkes said. “Even many of the highly educated Republican experts in town were surprised at the Trump victory. There tends to be an East Coast/West Coast elite bias in government and the media. Unfortunately, this bias leads people to forget about ordinary people who are struggling in places like Northeast Ohio or Western Pennsylvania. Trump’s victory will force the ‘Inside-the-Beltway’ experts to pay attention to some of these ordinary people’s concerns.”

“Like everyone else, I am praying for the president-elect to succeed. I pray that he will faithfully execute the laws of this country and respect our constitutional traditions. Christians are called to submit to the governing authorities, as Romans 13 says," Waalkes said. "But we are also called to obey God’s law, which is higher than any human construct (see Acts 5:29). We must also speak up for the 'least of these.' If our government or society begin to mock or oppress minorities, immigrants, Muslims, or the disabled, then Christians must speak up for these vulnerable groups. Religious freedom is a bedrock principle of American public life and we ought to maintain that for all religious minorities. I pray that we will be a more peaceful and tolerant country than it appears we are becoming.”