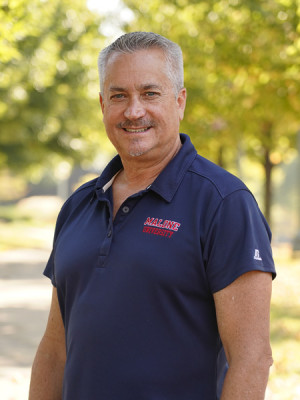 Joel’s terminal degree is a doctorate in Old Testament Theology. He studied abroad for his degree, first at the University of Durham in England, then completing his doctorate from the University of South Africa. Prior to his doctoral studies, Joel took two Master of Arts degrees with honors from Ashland Theological Seminary (ATS). The first of these ATS degrees specialized in the Old Testament, and the second of these in the New Testament. His undergraduate business degree was earned at Bowling Green State University.

Joel has been a full time professor of biblical studies at Malone since 1998.  He currently serves as the Chair of the Department of Bible, Theology, & Ministry as well.  During Joel’s academic career he has simultaneously served the Christian Church in a variety of staff pastoral roles, including: Outreach Coordinator, Youth Pastor, Christian Education Pastor, Associate Pastor, and Worship Pastor.  Joel has also ministered as a lead Pastor during his Malone tenure. He has served four churches in this capacity. Presently, he serves as the Lead Pastor of the First Brethren Church of North Georgetown, Ohio. He is an ordained minister with the Ashland Brethren.

Joel has published three books. His most recent work is a co-authored textbook entitled, Introducing the Bible to 21st Century Readers by Linus Publishing. Previously, he published Lucifer, Leviathan, Lilith, and Other Mysterious Creatures of the Bible (Hamilton Books), and Food and God: A Theological Approach to Eating, Diet, & Weight Control (Wipf & Stock). In addition, Joel has published numerous academic articles through Inter-Varsity Press, Abingdon Press, and the Ashland Theological Journal and has written book reviews for the Church Health Reader magazine.

Joel teaches both Introduction to the Bible and Introduction to Theology in the Malone University General Education program. He also teaches one course in the capstone GEN 460 curriculum entitled The Spirituality & Ethics of Food & Eating. In regards to his own department, Joel teaches a number of upper division bible courses, as well as an Introduction to Ministry, Pastoral Care, and Senior Capstone. He currently supervises the internship program as well.

Joel has been married to his wife Migdalia since 1989.  Their son Joseph was born in 1993 and their daughter Shari in 2001. As a young man, Joel served in the infantry with the United States Marines. He later became an officer with the US Navy Chaplain Corps and served tours of duty as a Military Chaplain with the Navy, Marine Corps, and Coast Guard. He earned the National Defense Ribbon for both Operation Desert Storm and Iraqi Freedom.

Joel is a member of the Society of Biblical Literature. His personal interests include playing musical instruments, physical fitness, and nature. He also plays baseball in the Ohio Men’s Senior Baseball League.